Production af the famous Schultz and Larsen rifle M68DL began late 1966 and early 1967. This meaning that the parts for the new riffle, actions, stocks, bolts and receivers were produced for later assembly. The factory in Otterup had had great success with their M65 and 65DL. These rifles had sold in 4,500 copies all over the world and the factory was eager to repeat the success.

A new model was born, closely resembling the M65DL. The M68DL was equipped with rosewood at the fore end of the stock like the M65DL but had another type of safety mechanism, as well as a new recoil pad, the White Line recoil pad from US with the Schultz & Larsen name engraved. A new type of magazine opener was introduced, a small button was placed in front of the trigger guard. All models were branded “Model 68DL”.

Most stocks were made of light coloured American Walnut and they had a shiny finish of lacquer, an American trend from the sixties. Today we all seem to prefer waxed or oiled stock finish.

By the end of the production years of the M68DL, first class French walnut was used, often of an excellent  wood grade. These had a finish of linseed oil and are very much sought after today.

The inlay between the rosewood forearm tip and the fore stock was changed to light wood instead of the synthetic inlay, that was used on the M65DL.

After searching high and low, Jørgen managed to buy two of these beautiful stocks for his own rifles. These rifles are pictured below. 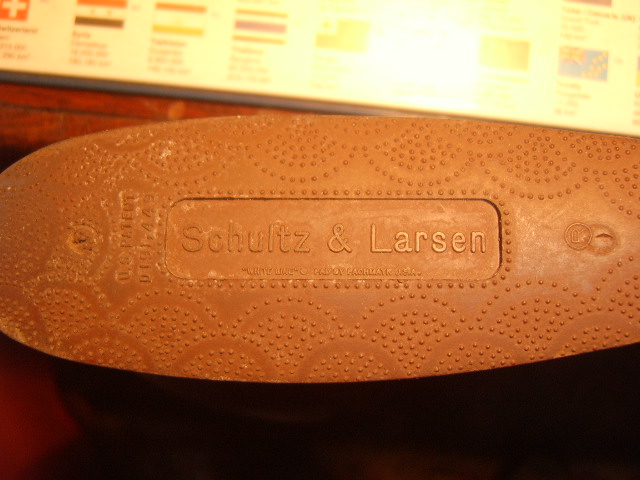 White Line from the US supplied the nice recoil pads with the factory name engraved. 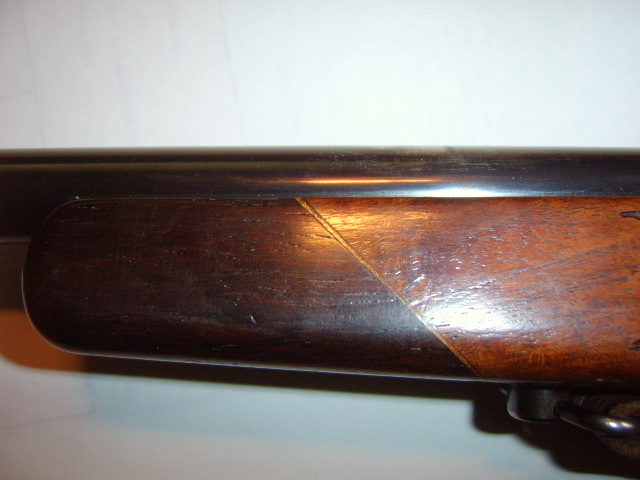 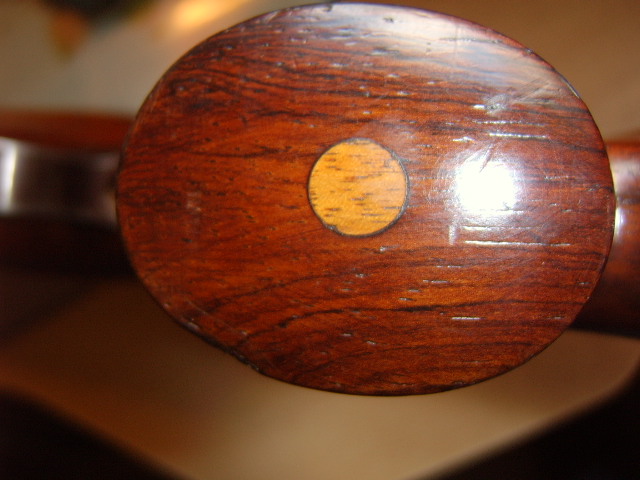 A few rifles have wooden inlay in grip cap 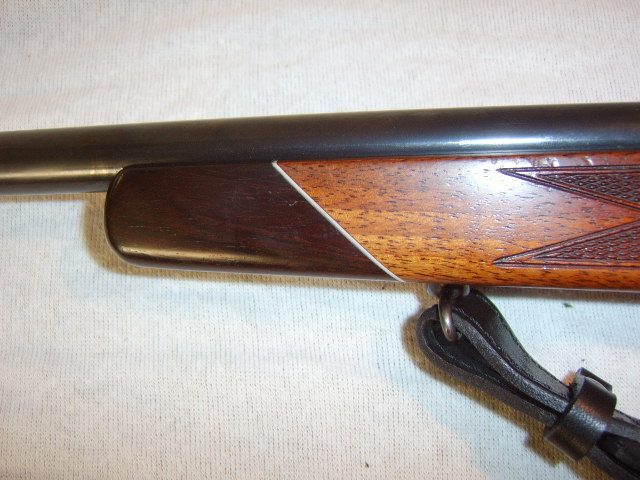 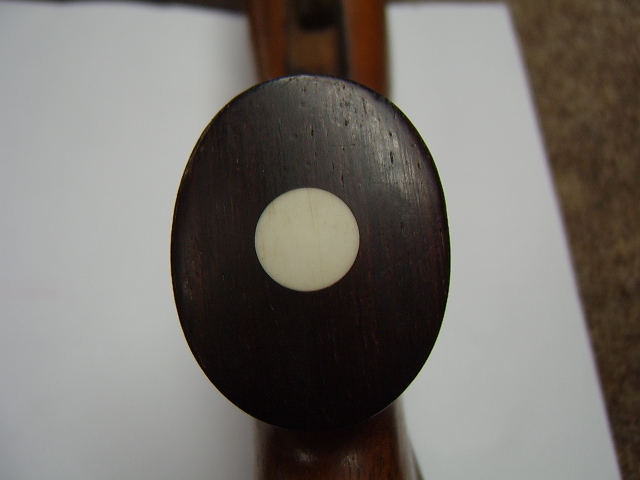 Most rifles have a synthetic inlay in the grip cap 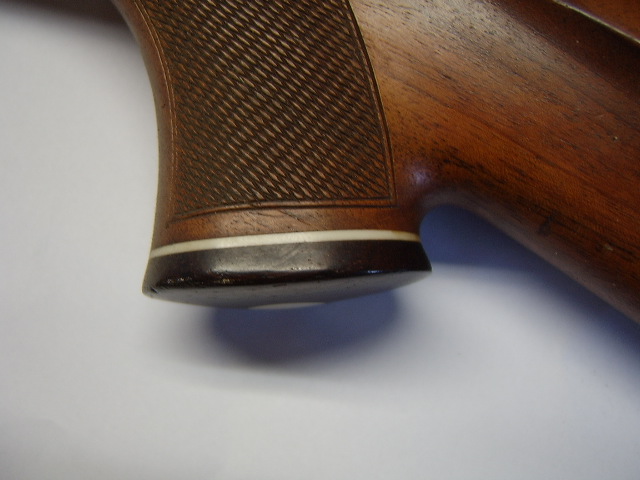 Synthetic inlay in grip cap seen from the side

The ejector port of the M68DL was lowered a few millimeters. At the time many rifles (not only from the Schultz & Larsen factory) suffered from an ejector problem. The ejected cartridge case was thrown diagonally up into the air, causing it to accidentally hit the right mounted height adjustments on certain types of scopes. This again caused the empty case to bounce back into the receiver and made it impossible for the shooter to repeat his rifle quickly. At the time most hunters mounted their rifles with 4x32 scopes (ie scopes with fixed magnification) and the scopes were mounted low thus making this occur frequently. It goes without saying that this could be fatal on a hunt for dangerous game – as well as disappointing on a hunt where a second shot was called for.

Otterup had previously recognized this problem and had scopes from Bisley prooduced with left mounted height adjustments  to prevent this from happening. When the M68DL was designed, this was taken into account and the ejector port was changed. 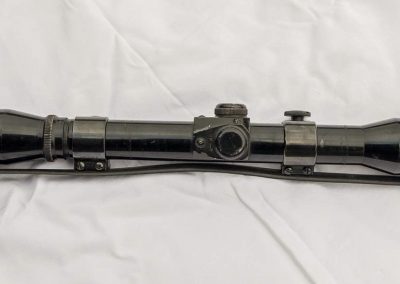 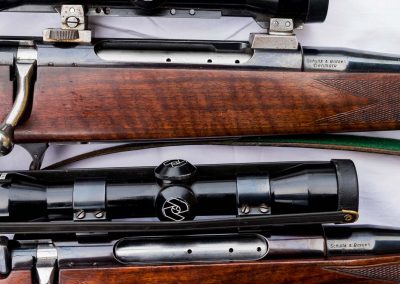 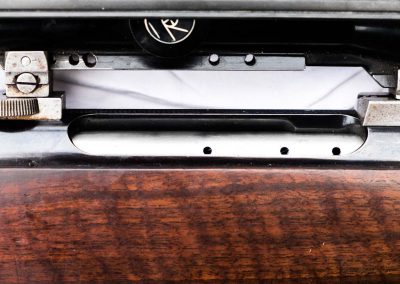 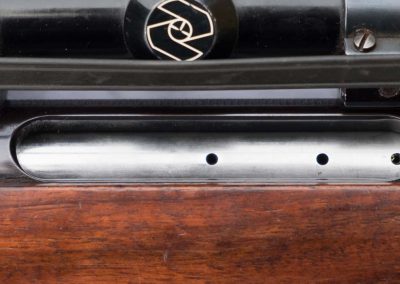 Today there is a new trend. Many hunters spend large amounts of money buying scopes with new and sophisticated equipment such as illuminated reticles, greater low light performance, ballistic turrets and some even with an integrated rangefinder. All this advanced equipment requires space and scope mounts grow larger and larger as do the scopes.

As a rifle instructor I meet a lot of hunters in the shooting range when they come to zero their rifles. The vast majority of them actually have their scopes mounted much too high. It would be quite impossible for them to shoulder the rifle in a hurry to fire a quick shot – it takes too long for them to find the target in the scope – they have to adjust the cheek contact to find their sight, and they are not able to do it exactly the same way repeatedly.

A good old-fashioned 4x32 scope in a low-mount is formidable for the quick shot. You do not have to mess with settings, the scope is as it always is when you take it out of the gun cabinet. You can simply just concentrate on getting to know your  “bullet” and its ballistics to know how to aim your rifle. KISS. Keep it super simple…. 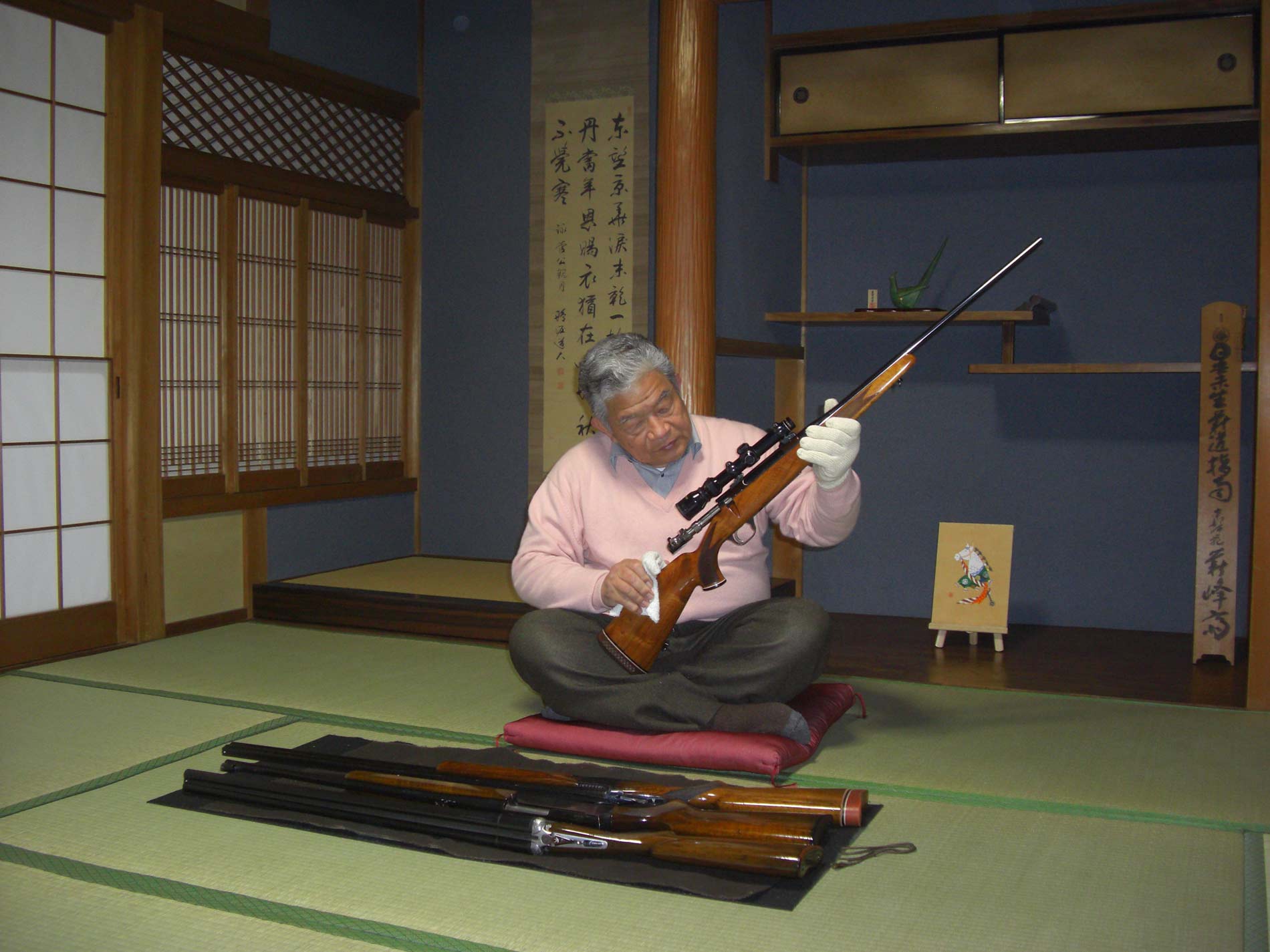 Today the famous Otterup Rifles can be found all over the world. They are carefully maintained by hunters who acknowledge good quality in Norway, Australia, Germany, in the US as well as in Japan, as pictured above.

The M68DL of Joergen, the Professor

Jørgen, the professor from these pages, remembers very well when he bought his own first M68DL caliber .308 Win. He still owns it and still goes hunting with it.

It was on June 24th in 1967. Joergen received a phone call from the Otterup factory when the rifle he had ordered and long-awaited, was ready for pick-up. The price was DKK 1042,-  including scope, sights and cartridges. Quite an amount of money back then. The rifle has been hanging from his shoulder on many a hunt since then and brought home lots of game and many good hunting experiences. We will get back to that another time.

“It was a great day. Both Sigurd and Uffe Schultz Larsen were present in the office that day – Uffe told me that I was buying one of the first new M68DL rifles produced and assembled at the factory. I was excited.

I just listened to them talking in the office. Back then there was no Google, no advertising, no information at all to get anywhere about rifles, and I listened and swallowed greedily everything they told me. Guns and  especially rifles from Otterup had and still have my great interest.

After a while Uffe asked me if I wanted cartridges to go zero the rifle at a 100 m in the basement, where their shooting range was situated. I accepted eagerly and Uffe entered the office holding a catalog from Norma dated 1966 in his hands, and I could not believe my own eyes. I so much wanted to own this catalog.

After having zeroed the rifle, I was curious about this catalog, I had never seen such a thing before – a catalog with more than one type of cartridges. I was told that I could not have the catalog as this was the only one they had. I must have looked very disappointed because after a bit of searching Sigurd found a second one, and he gave it to me. I could bring it home to study….

Imagine, the fact that there was more than one cartridge to choose from in the world, was quite new to me. This catalog was like a revelation to me, and I still have it. “

Joergen takes a glowing interest to everything produced at the Danish Rifle Company in Otterup, and it is not hard to guess that this particular model the M68DL is “The One”, the favorite over them all.

Joergen has been informed by the factory at the time, that they have produced about 2000 pieces of this particular rifle, the M68DL. The exact number was not known – nothing was registered back then.

Joergen has since 1967 worked up a register of the Schultz & Larsen rifles produced by the factory, and as it turns out only about 1800 was produced. If you are fortunate enough to own one of these famous rifles like the  M68DL or perhaps another rifle produced at the Danish factory,  you can register with Joergen on his website www.schultz-larsenrifleclub.dk. Your name will not be published but Jørgen very much would like to know about your rifle and its whereabouts.

It’s interesting to follow the story of the different rifles – many are passed down from father to son and grandson, and not many have passed by Joergen´s eye.

On Joergens own website you can register your Schultz and Larsen rifle, should you be fortunate to own one, that is not already registered.  You can find the formula here. Your name and address will not be published, but we would appreciate to learn of the whereabouts of as many M68DL as possible.  You can find the Joergens´s register here:  Registered S&L Model 68DL

The M68DL becomes too expensive to produce

Unfortunately, the production price of the Model 68DL rifles was too high, and the competition too great – new and cheaper rifles entered the market. Schultz & Larsen could not compete and in 1970 they ended the production of the series. A total of 3 series of Model 68DL was produced, some with actions from M62 target rifles bearing the same numbers as Model 68DL, a cause of confusion. They were also the last rifles to leave the factory, produced with a bolt with  lugs  placed at the back of the bolt, locking into the action, and not as it later became more popular, with lugs at the tip of the bolt locking directly into the barrel. The bolt with the lugs placed at the back had been the trademark of Schultz & Larsen from 1938, starting with M38. The Schultz & Larsen M100DL became the first rifle from Otterup with the lugs placed at the tip of the bolt, inspired from Sauer, Weatherby and others at the time.

The Model 68DL is considered the best of the rifles ever made at the Otterup factory and it holds the highest resale value today.

( When Joergen ordered his M68DL .243 the factory had no more M68DL actions in stock , so his second Otterup rifle became a hybrid, with a M65DL action, but built as a M68DL. Additionally his M68DL .308 has later on had the magazine opener changed to the one from the D65DL, which appeals more to Joergen.)

The trigger and the cartridge magazine opener 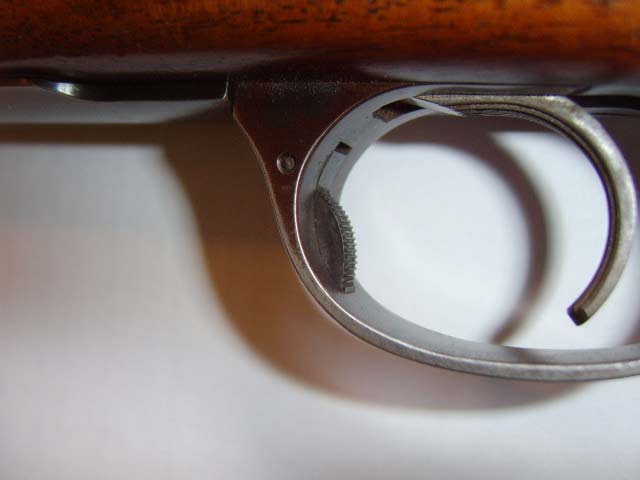 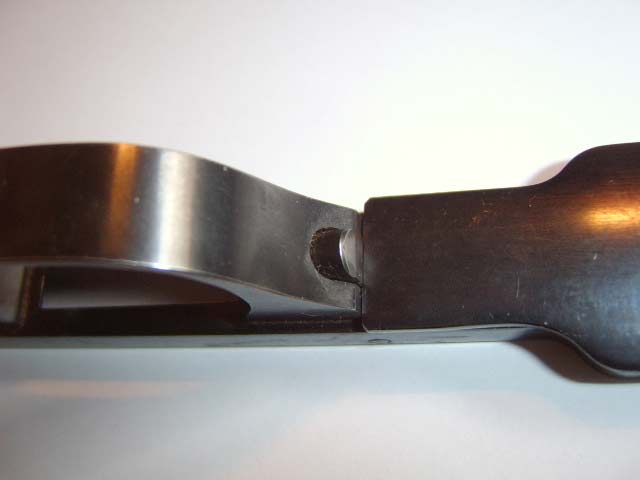 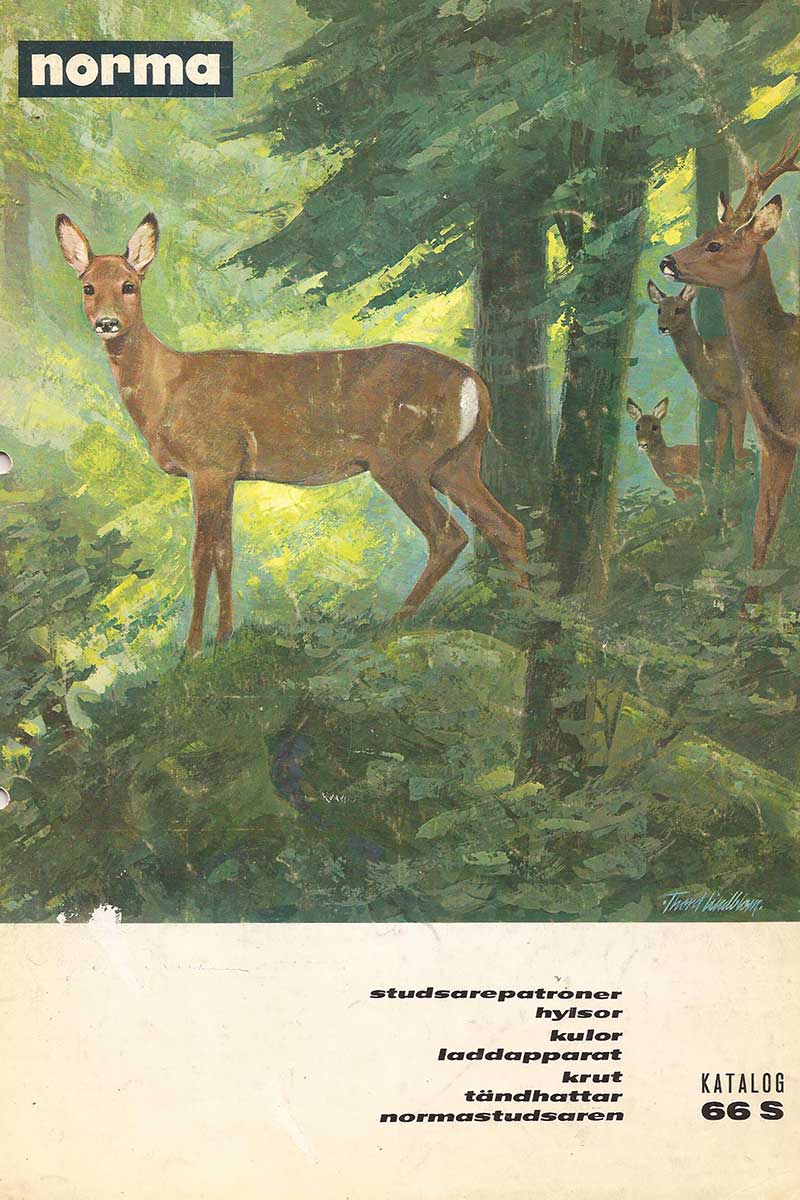 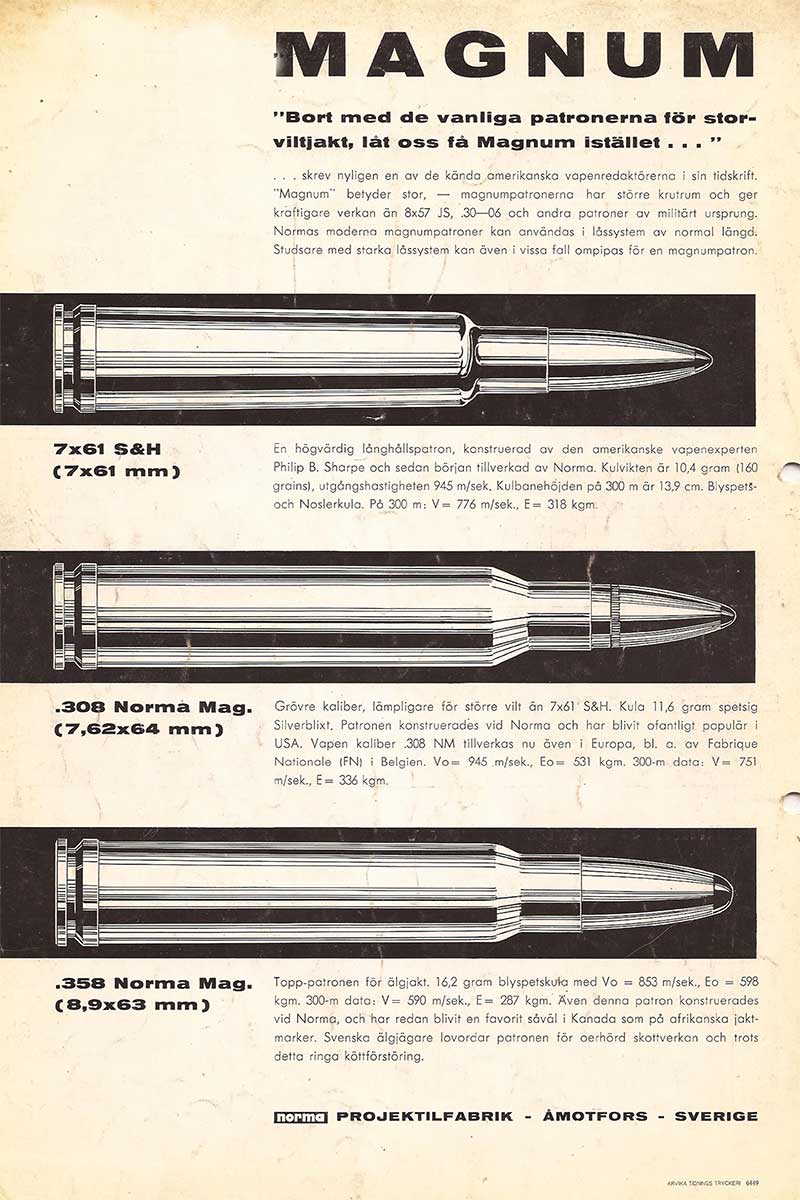 Old advertisement for the M68DL 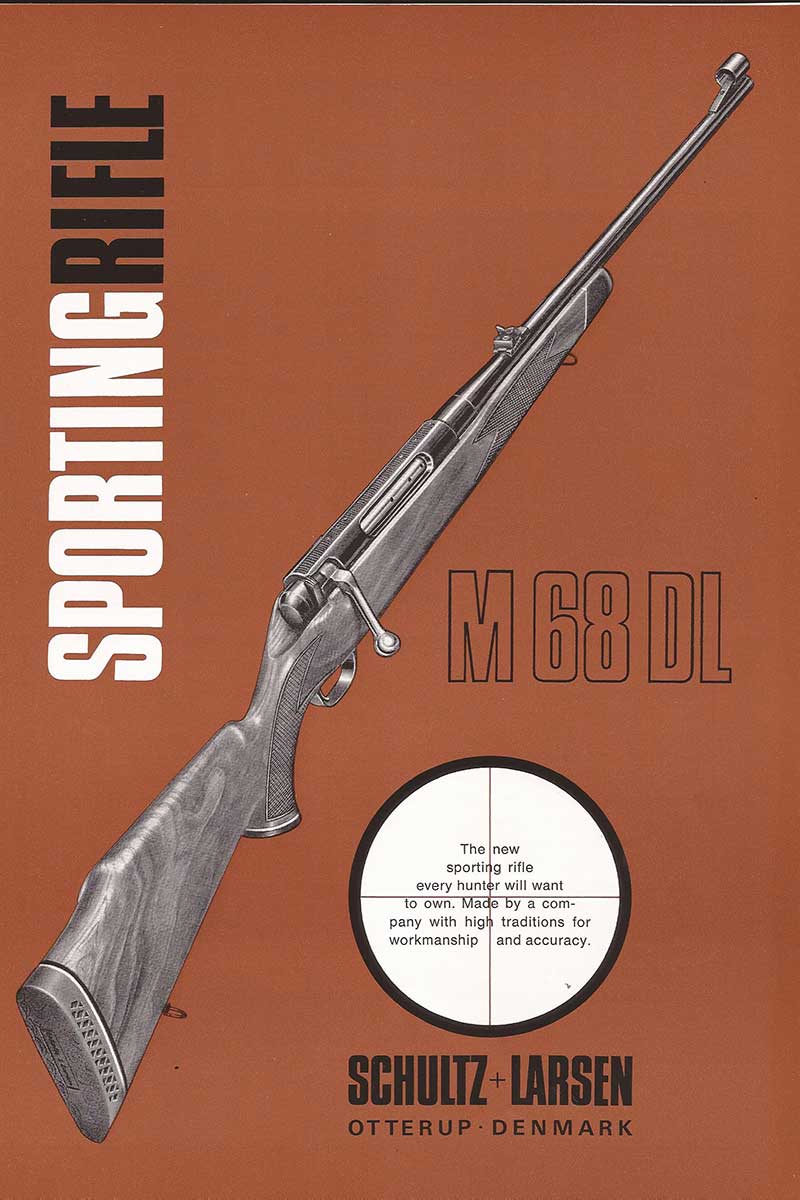 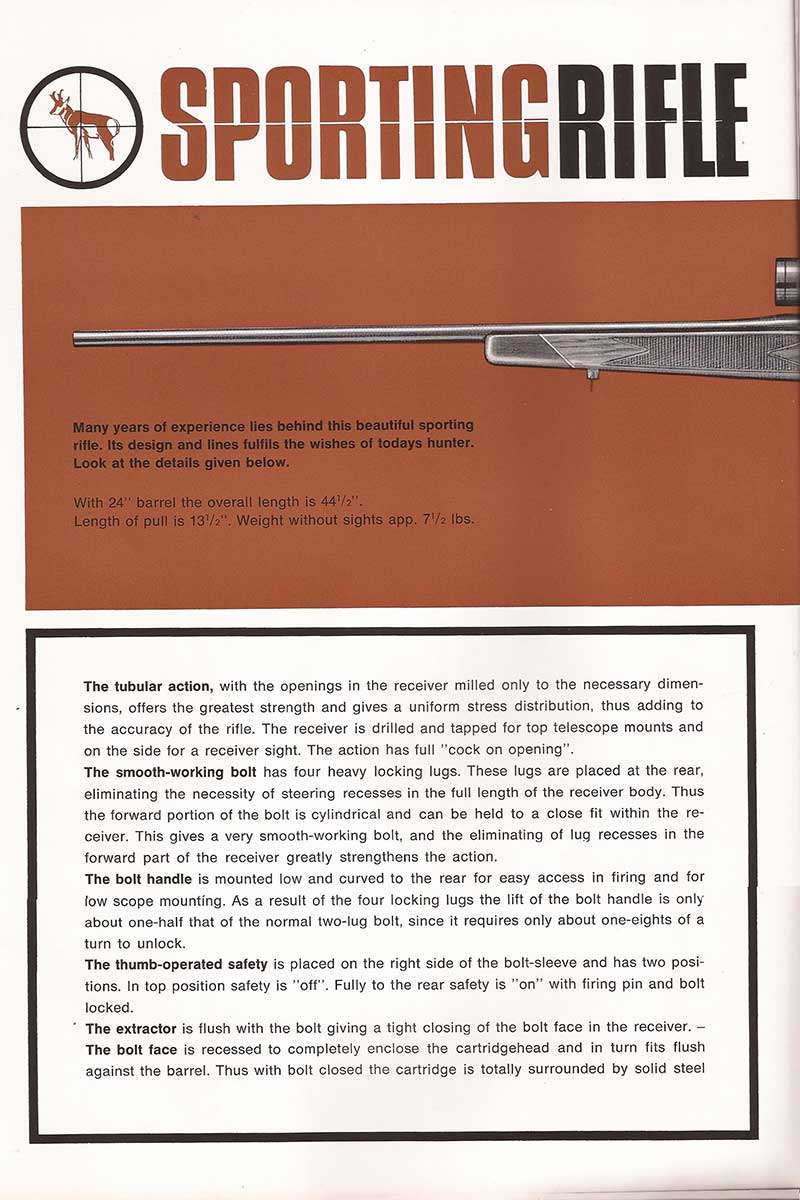 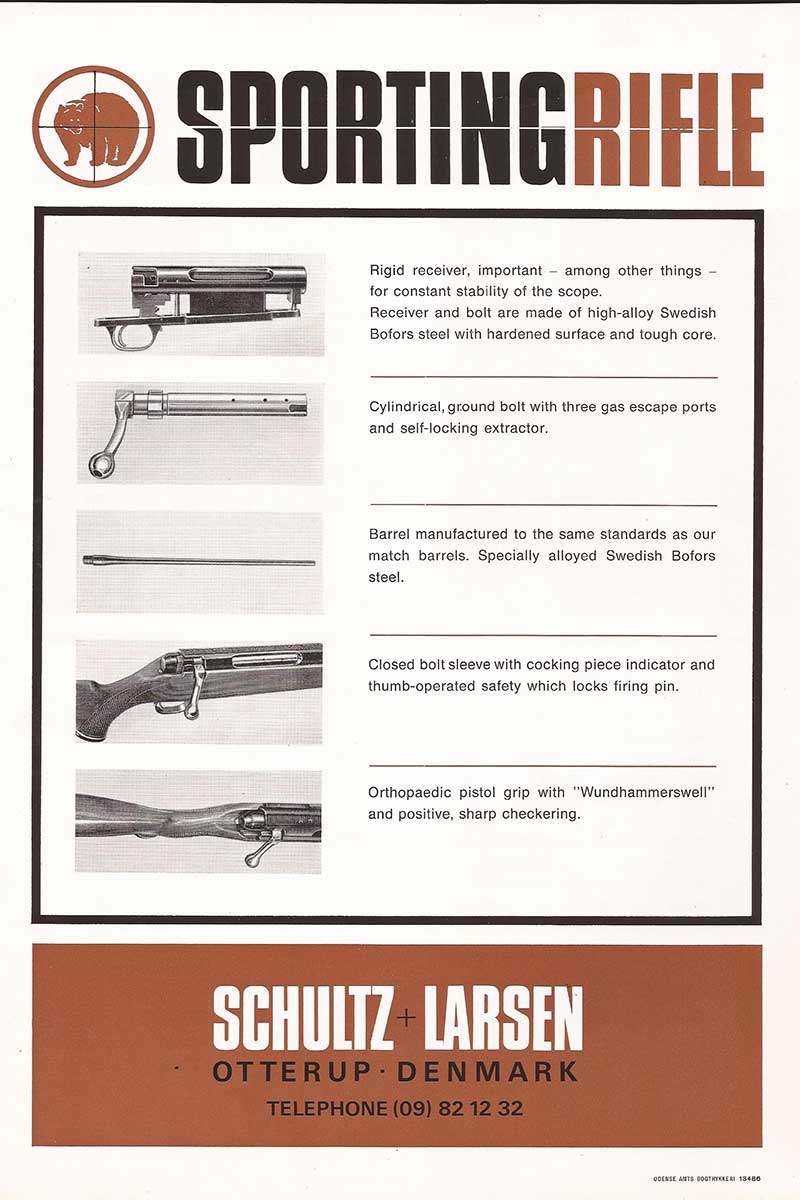 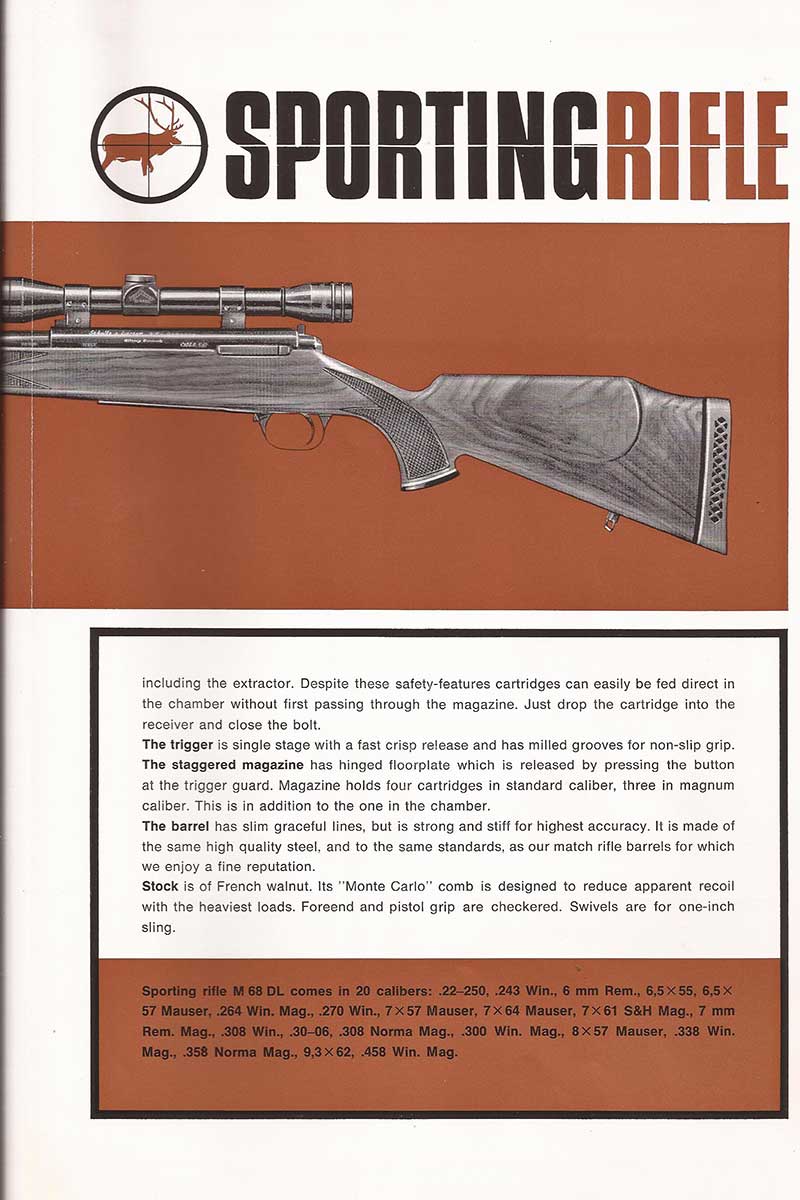 This article is a co-production of Joergen, the Professor, and Krudtmama, Gitte – translation assistance, Jesper Lundbeck.